Popular Posts
The Story Of Attah Ameh Oboni – the...
The state of Osun Anthem,Yoruba and English.
Teju is a Natural Leader – Rauf Aregbesola.
The Biography of the Alaafin Oyo his imperial...
Opon Imon (Tablet of Knowledge)Read this carefully from...
World 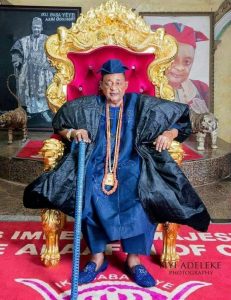 His Imperial Majesty, the Alaafin of Oyo, Oba [Dr.] Lamidi Olayiwola Adeyemi 111, the Alaafin of Oyo, has berated leader of the fractional Afenifere Group, Ayo Adebanjo, and his cohorts for their continued ferocious attacks on President Muhammadu Buhari’s administration, All Progressives Congress National Leader, Asiwaju Bola Tinubu, and South-West Governors over security challenges in the region.
Alaafin said such attacks ‘’are hypocritical, unfounded and mere illogical militancy’’.

Oba Adeyemi made the remarks on Thursday [June 27th, 2019] at the Presentation of A Book, Titled; AWO, held at the International Conference Centre, University of Ibadan.

The royal father, who noted that Yoruba are the architects of their misfortune, noted that for any group to engage in buck passing, attacks and militancy against those in authority will amount to shedding the crocodile tears.

Alaafin specifically recalled how Ayo Adebanjo circumvented and betrayed the Yoruba during the tenure of late Chief Obafemi Awolowo as Premier of the defunct Western Region.

According to him, ‘’it was Ayo Adebanjo who was then the Private Secretary to Awolowo, in connivance with his like-minds that fabricated and misinformed the then Premier that some Yorubas were stockpiling arms and ammunitions preparatory for war’’.

The royal father also challenged former President Olusegun Obasanjo, to tell the world what he did while in power to uplift and promote the cause of Yoruba.
‘’The situation on ground does not call for personal animosity, hurling of insults, attacks or engage in militancy against constituted authorities, but require holistic approach on workable solutions and how best can the Yoruba be coherently coordinated’’.

The royal father’s speech delivered extempore reinforced the fact that intellectual virtues are qualities of mind and character that promote intellectual flourishing, critical thinking, and the pursuit of truth, as they include, intellectual responsibility, perseverance, open-mindedness, empathy, integrity, intellectual courage, confidence in reason, love of truth, intellectual humility, imaginativeness, curiosity, fair-mindedness, and autonomy.

Alaafin who raised a poser as to whether or not Yoruba can speak with one voice as in the days of Awolowo given the current political exigency of the country, said that during the late Chief Obafemi Awolowo’s period, patriotic Yoruba leaders across different political parties sank their individual political differences in the overall interest of the Yoruba nation.

‘’It is not only instructive but historic and informative that those who nominated Chief Awolowo for the leadership position are people from other political parties, apart from Awolowo’s Action Group. That historic nomination was made by no less a person than Chief Adisa Akinloye of blessed memory. That was an era when opposition did not translate into enmity’’.
Iku Baba Yeye pointed out that ‘’if today, Yoruba cannot speak with one voice, it is not because the race does not have potential leaders of wisdom, talent, and integrity. Rather, it can be found in the level of factionalisation which has almost graduate to the level of personal antagonism and mutual suspicionism; which indeed is unfortunate’’.

On the unprecedented state of insecurity culminated by kidnapping, herdsmen harassment and all sorts of criminality that have enveloped Yorubaland today, Alaafin submitted that ‘’what is even worrisome is that most of these Fulani people are alleged to be non-Nigerians, but migrants from some West African Countries’’.

He said, ‘’ the Yoruba are proud of their harmonious relationship with indigenous Fulani which has spread over many centuries. Such relationships have led to inter-ethnic marriages and business entrepreneurshi
ps. At that time, cattle herders carried sticks to direct movement of their cattle, as cattle rearing was not battle ravaging. It was unlike now when supposed cattle rearers are armed sophistically like soldiers. At that time, farming and rearing were complimentary to each other unlike now where they are targeted against each other.’’

Oba Adeyemi, however, asserted that as far as he is concerned, ‘’there is no solution to the current national challenges than restructuring of our Federal system to the glorious old days with some modifications where necessary’’.

‘’Presently, there is too much power concentrated at the centre beyond any mortal capacity to supervise and superintend the whole national security. Unfortunately, some people at the moment see restructuring as synonymous with secession. But the truth is that rather than seeing as synonymous with secession, it is in the actual sense an antidote to secession. The present system is too unilateral for comfort.’’

Oba Adeyemi went further, ‘’suffice it to say that a return to the old system with some modifications will return to the glorious days when each Federating unit developed its local skills to benefit the grassroots. At my own level, I have been persistent and consistent in any advocacy for true Federalism. My doggedness in that resolve has been misunderstood in some quarters’’.

He noted that the situation as of today is so bad that some traditional rulers across the country had constituted themselves into a National Traditional Council Forum, adding that ‘’if care is not taken at the right time, it may not be too long for us to have a Federal Ministry of Local Government And Chieftaincy Affairs’’.

Conclusively, the Royal pundit argued that in his opposition to the National Traditional Council as being antithetical to true Federalism, he has been misunderstood by some of fellow traditional rulers.
‘’My response to that however is that it is not a personal issue between me and anybody. Rather, it is too fundamental to the survival of the country based on respect for cultural heterogeneity’’.

Earlier, Afenifere factional leader, and leader of the Yoruba Liberals, Ayo Adebanjo, in his address full of insults, abuses and personal animosity against Asiwaju Bola Tinubu and the APC Governors, excluding that of Oyo State who is PDP in the South West, to the chagrin of invited guests, including the Deputy Governor of Oyo State, described them as ‘irresponsible and irresponsible public office holders’.
Note:
Dear Young Yoruba,
As the President of the Young Yoruba for Freedom (YYF), I have always insisted that the Yoruba Liberals who are predominantly supporters of the PDP-Yoruba and members of the Pentecostal Churches are evil minded people and the problem of the Yoruba nation.
Please kindly read again below how Alaafin of Oyo described Ayo Adebanjo, the leader of Afenifere fractional group and the Yoruba Liberals:

“Alaafin specifically recalled how Ayo Adebanjo circumvented and betrayed the Yoruba during the tenure of late Chief Obafemi Awolowo as Premier of the defunct Western Region. According to him, ‘’it was Ayo Adebanjo who was then the Private Secretary to Awolowo, in connivance with his like-minds that fabricated and misinformed the then Premier that some Yoruba were stockpiling arms and ammunitions preparatory for war’’.

That was Ayo Adebanjo in the 60s and over 50 years later, he is still evil minded and anti-Yoruba. Remember it was he who said that the Igbo must be President in 2023 when no Yoruba has ever been President.