Popular Posts
The Story Of Attah Ameh Oboni – the...
The state of Osun Anthem,Yoruba and English.
King (Dr) Saheed Osupa 58 Albums between 1992...
Teju is a Natural Leader – Rauf Aregbesola.
The Biography of the Alaafin Oyo his imperial...
Politics

A Senior Advocate of Nigeria, Chief Wole Olanipekun today 7th of march 2019 told the Osun State Election Petition Tribunal that the petition filed by Senator Ademola Adeleke was a bedlam riddled with confusion. 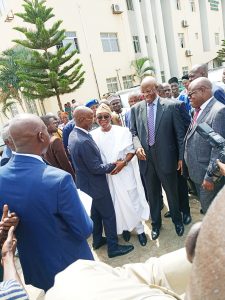 Delivering his final written address as the leading counsel to Governor Adegboyega Oyetola before the Tribunal, Olanipekun thrashed the petition for being inconsistent and confusing.

Chief Olanipekun called Senator Adeleke as a self-confessed petitioner who cannot benefit from the wrongs he admitted to have committed during the Osun governorship poll.

Submitting that the Senator Adeleke admitted that he committed illegalities, the Silk told the Tribunal that he could not be allowed in law to benefit from his own wrong.

“My Lords, the petitioners have admitted to committing illegalities. A self-confessed petitioner or litigant who has admitted to have breached the Electoral Law cannot be heard to be asking to be returned as the winner of the election”, the SAN said.

Speaking further, Olanipekun quoted a Latin maxim ” ex turpi causa, non oritor actio” which he interpreted to mean that no one is allowed to benefit from the wrong he has committed”.

The silk said further that “the petition is a bedlam. Which one do we believe and which we do we disbelieve in the reliefs they sought. This is against the provisions of Section 131 of Electoral Act which says that you cannot amend your reliefs. My Lords, the petitioners presented tables which figures contradict each other. Their figures have changed from 548 to 353. I urge your Lordships to dismiss this petition. It is a bedlam riddled with confusion. No one knows which one to believe in their prayers and which one to disbelieve.”

Calling the attention of the Tribunal to pages 37 to 39 of the Petitioners’ Written Address, Olanipekun argued that Senator Adeleke and the Peoples Democratic Party (PDP) stated in their final written address a different case that was entirely different from what was contained in their petition.

Faulting the petitioners’ prayers to nullify the Certificate of Return issued by the Independent National Electoral Commission (INEC) to Governor Oyetola, the SAN wondered how the Tribunal could nullify a Certificate that was not presented to it.

He then cited last Wednesday’s decision of the Court of Appeal that refused to grant the prayers of an applicant seeking to be allowed to carry out forensic analysis of electoral material because it conflicted with the provisions of Section 151 of the Electoral Act.

According to the Silk, the ruling has become an issue because once an application violates the provisions of the law, the court lacks jurisdiction to grant it.

In view of the recent decision of the Court of Appeal, Olanipekun submitted that the petitioners had abandoned their prayers which qualifies the petition for dismissal.

“Electoral jurisprudence is proof in accordance with the law and precedence. They want your Lordships to set aside both the Electoral Act and the decision of the Court of Appeal. In fairness to the petitioners, they have abandoned their prayers.”

Leading Counsel to the All Progressives Congress (APC), Chief Akin Olujinmi (SAN) on his own part, argued that out of all the witnesses called by the petitioners, 63 of them who were polling unit agents gave evidence in respect of different polling units to which they were assigned.

Olujinmi submitted that the evidence given by the 63 witnesses were common in language and other material aspects.

“Their responses were common in language and everything. All their 63 witnesses gave evidence that should not be given any probative value. This has already been established in the case of Ation Congress of Nigeria vs. Murtala Nyarko. All the other witnesses had nothing to do with the polling units and are unhelpful to the petitioners

Though the petitioners claimed in their final address that they tendered many documents, Olanipekun wondered what they made with those documents.

“It is settled law that you don’t just dump documents on the Court. Documents have no mouths to speak to the Court.”

According to Olujinmi, the Petitioner’s Witness number 74 did not help the petitioners i n his testimony because he gave evidence on all the polling units that the petitioners were challenging.

“The petitioners called PW 74 who was a Collation Agent and who gave evidence won all the polling units the petitioner was challenging. To be fair to him, he admitted to be speaking to the documents that came to his possession. It is settled law that the evidence of such a witness is valueless. The evidence of PW 74 cannot assist the case of the petitioners.”

Dr. Onyechi Ikpeazu (SAN) leading counsel to the petitioners urged the Tribunal to allow the petition and grant their prayers.

He based his submission on the allegations of noncompliance and irregularities established by the petitioners.

Ikpeazu cited Section 285 of the Electoral Act to sustain the fact that because of action exists in the petition.

According to the silk, the petitioners have proved that there was undue return and an undue election.

The silk posited that there must be a return before any challenge can be made on the return since it has to be a a holistic challenge.

Citing the case of Aju v Odion (201) 5 NWLR (Pt. 1241) page 509, Ikpeazu stated that the 2nd and 3rd Respondents have no written addresses before the Tribunal because they had abandoned the issues they formulated.
“This is not an appeal where parties can formulate issues at large.”.

He submitted that the petitioners tendered clean copies of documents adding that the Tribunal will make reference to witness depositions and not just oral evidences given in Court.

These documents, Ikpeazu argued, have shifted the burden of proof to the Respondents most especially INEC to call witnesses in rebuttal.

The rebuttal, he maintained was necessary to justify the evidential presumption of regularity of the documents.

He submitted further that the INEC Guidelines tendered by the Respondents were those of 2015 and not meant for the 2019 elections.

The silk insisted that INEC could not do anything beyond the provisions of Section 179 of the Electoral Act.

RE: TINUBU BANS AJIMOBI – The Tree of Falsehood Grows.