A pregnant woman caught in hotel with a concubine.

FLASH: PREGNANT WOMAN CAUGHT IN HOTEL WITH A CONCUBINE 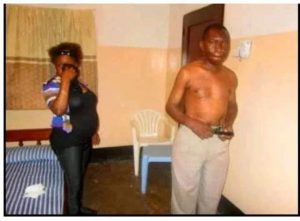 The husband did not pay attention to the rumors until he caught his wife in bed with another man. Reports has it that, his wife and her lover went to their hotel to have fun as usual.

It is noted that they normally use a particular hotel whenever they want to meet and enjoy each other. The husband was informed of their meeting and was already alert. He received a call then he burst into the hotel only to see his pregnant wife with another man.

Oyetola came to power on the strength of Aregbesola’s policies he is dismantling now; Barrister Kolapo Alimi.

Why Aregbesola Suspends Visitation To Ikirun.