My Vision For Osun Central Stands…SRJ 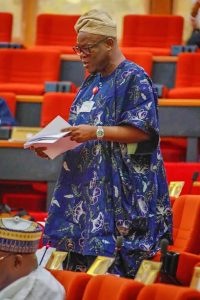 One of the greatest assets a Muslim can have and be proud of is truth.

Senator Ajibola Basiru of Osun Central Senatorial District stated this while addressing the congregation shortly after observing Jum’at in Osogbo.

Senator Basiru who reiterated his commitment to his Pact With Osun Central emphasised that what is being done in borehole provision round the Senatorial District is just a tip of the iceberg in what people would enjoy in four years.

“My mission and vision for Osun Central as contained in my manifestos remain unshakable. I will not promise what I won’t be able to deliver. Nevertheless, I need your prayers,” Basiru remarked.

He enjoined the people of Osun Central to always visit ajibolabasiru.com for updates about happenings at the National Assembly as relate to Osun Central. He used the occasion to inform that his Senatirial Situation Office at Ayetoro Osogbo is very near completion.

The Chairman, Senate Committee on Human Rights called for prayers from all and sundry for Governor Gboyega Oyetola, President Muhammadu Buhari and the nation at large.

He emphasised that what the Nation needs most at this moment and at all times is prayer.

Senator Ajibola Basiru proceeded to the Commissioning of the Constituency Relations Office of Hon Bukola Oyewo of Osogbo Federal Constituency where the House of representatives member distributed letters of appointment to 41 aides.