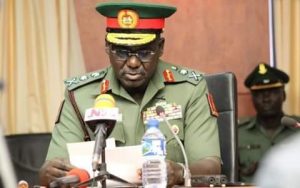 Following the killing of three police officers by soldiers of the 93 Battalion of the Nigerian Army, in Taraba State, last Tuesday, the Chief of Staff, Lt. Gen. Tukur Buratai, has directed troops on internal security duties to be cautious in their dealings with members of the police force.

He also admonished travelling military personnel to do so in mufti in order to avoid confrontations with policemen.

The Intelligence Response Team of the police led by ASP Felix Adolije had come under attack from soldiers along Ibi-Jalingo Road while taking a kidnap kingpin, Hamisu Wadume, to the Command Headquarters in Jalingo.

The Nigerian Army had claimed that the soldiers fired at the IRT team because they failed to stop at three checkpoints, but this was dismissed by the police which demanded the whereabouts of the kidnap suspect who was allegedly set free by the soldiers.

But the COAS in a letter dated August 9 and copied to Army formations nationwide accused the police of making inflammatory comments in the social media which he said was capable of inciting the rank and file of the Nigeria Police to “exhibit aggressive tendencies against NA personnel.”

The letter with reference number AHQDAIOPS/G3/240/232 written on behalf of the COAS by Brig. Gen. F. Omoigui was titled, ‘Need for troops to be circumspect in dealing with members of the Nigeria Police.’

It read in part, “In the aftermath of the unfortunate incident involving troops of 93 bn, Takum and members of the Intelligence Response Team of the NPF at Ibi LGA of Taraba State on August 6, 2019, inciting and inflammatory comments are being made by the NPF on the regular and social media platforms.

“This is capable of inciting the rank and file of the NP to exhibit aggressive tendencies against NA personnel. Accordingly, all troops on IS (Internal Security) duty as well as personnel travelling in and out of uniform are to be circumspect in their conduct to avoid escalation.”

“Consequently, formations and unit commanders are to educate troops to be cautious in their dealings with members of the NP in view of this development. Troops travelling on pass are to endeavor to do so in mufti,” Buratai cautioned.

The Force Public Relations Officer, DCP Frank Mba, could not be reached for comment on the allegation of incitement levelled against the police by the Army as calls to his phone on Monday rang out.

Nigeria, South Africa must work together to solve xenophobic attack.