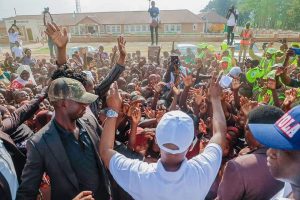 . As Gov pledges better days ahead

The Governor, The State of Osun, Adegboyega Oyetola, was on Tuesday joined by thousands of Osun indigenes on more than 3 hours’ walk across Osogbo, the state capital as part of activities marking his first year in office. 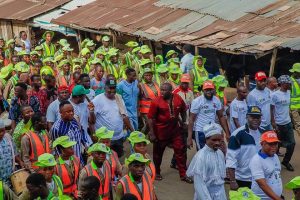 Tagged “Walk to Greatness”, the exercise began from the Government House as the participants, led by Mr. Governor, his wife, Mrs. Kafayat Oyetola and the Deputy Governor, Mr. Benedict Alabi, moved steadily through Okefia up the Workers’ Drive, Oja Oba, Sabo, Ayetoro and ended at the Nelson Mandela Freedom Park.

The governor, while addressing the elated crowd of participants at the Freedom Square, thanked the good people of Osun for their support in the last one year, assuring them of better days ahead. 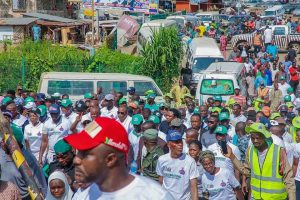 He also gave thanks to God Almighty for making it possible for him to achieve so much in the last one year, including prompt payment of salaries and allowances to workers and pensioners, provision of adequate security, infrastructure, free health care delivery and quality education, among others.

He said, “I want to thank the good people of Osun for the love you’ve demonstrated in trooping out en mass to join the walk. I didnt know I have this enoumous strength to walk 10 kilometers. If you ask me to walk another 10 kilometers, I am ready. 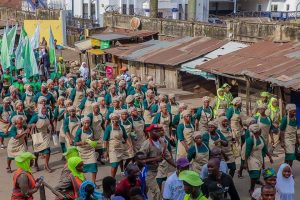 “We have achieved a lot in the last one year across all sectors, including revitalisation of 332 primary health care centers across the State. We thank God that the era of modulated salary is gone. Workers now get their salaries as and when due. Salaries for this month will be paid before this week runs out. Pensioners too have been getting their benefits. This shows how much priority we give to the welfare of workers. 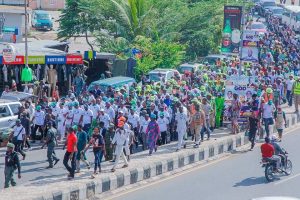 “In the last one year, I can tell you that we have been able to rehabilitate a lot of critical roads. Again, the issue of security has been brilliantly addressed. We’ve provided tremendous support for security.

“I thank you all for your support in making the just-concluded Economic and Investment Summit in the State a success. It is our plan to revamp our economy across all sectors. Instead of going round the world to talk to investors, we have decided to bring investors down to see for themselves and choose the area they want to invest in.

“While assuring you of our readiness and determination to continue with the good works, we urge you not to shy away from performing your civic responsibilities. We assure you that we will continue to run a government of transparency and accountability. May God bless you all.” 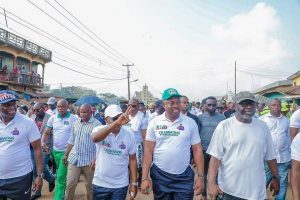 In his remarks, the Commissioner for Youths and Sports, Hon Azeez Yemi Lawal, maintained that the exercise was no fewer than a 10-kilometre trek, adding that by walking such a long distance nonstop, the governor has further convinced the good people of Osun and the world at large that he is both physically and mentally fit to govern the State for the next seven years.

He commended the governor for offering to lay down his physical strength for the good services of the state.

Among those who walked in company with the governor were the Chairman of the ruling All Progressives Congress (APC) in the State, Prince Gboyega Famoodun; the Speaker of the State House of Assembly, Rt. Hon. Timothy Owoeye; Secretary to the State Government, Prince Wole Oyebamiji; the Chief of Staff to the Governor, Dr. Charles Akinola, and the Head of Service, Dr. Festus Oyebade.